By Tyson Lindley and Nathan Clark May 24, 2022Considering an IPO A Dutch Auction is a selling process where a seller starts with a high asking price and incrementally lowers the cost until there is a bid for the item being sold. When more than one item is being sold, buyers submit bids indicating the amount they are willing to pay and the number of items they are willing to purchase at that price. If there are not enough bids to sell all the items, the seller lowers the price even further, and the bidding process continues. The auction ends when there are enough bids to sell all the items, and all purchasers pay the lowest winning price.

The Dutch Auction method can also be used to price shares in an initial public offering (IPO). Entities determine the number of shares (or the number of items) they want to sell and set the share price (the amount they are willing to pay) through a bidding process rather than through hiring underwriters to set a price. Most companies still use an investment bank to run the auction process.

Dutch Auctions have been used in the past, notably by Google. At the time, in its S-1 registration statement (the filing the company is required to make with the SEC), Google stated:

Our goal is to have a share price that reflects an efficient market valuation of Google that moves rationally based on changes in our business and the stock market.1

The overarching goal of the Dutch Auction is efficient pricing for both the company and investors. Allowing investors to bid on the shares allows the market to set the price in a more direct fashion than the traditional IPO process. That hopefully leads to an efficient price and the inclusion of investors who are happy with the price paid.

For example, assume Company XYZ (the “Company”) wants to sell 25 million shares using a Dutch Auction to price its shares for an IPO. Investors would open an account with the Company’s underwriter, obtain a prospectus, and be given unique identification codes to participate in the bidding process. 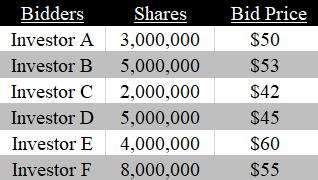 Upon concluding the bidding period, the Company’s underwriter calculates the price at which all shares will be sold. The underwriter creates a list with the highest bids at the top and works their way down the list of bidders until the total desired number of shares are sold.

Here is the sorted list of bids organized with the highest bids at the top and the placement of shares being sold:

In this example, the Company’s shares for its IPO would be priced at $45 because the last bid of 5 million shares exhausted the 25 million total shares the Company intends to offer. Investors E, F, B, and A would all be able to purchase shares for $45 instead of their initial bids. Investor C cannot purchase any shares because their bid price is too low, and there are no shares left to purchase.

As noted above, the hope is that the price best reflects how the market values the company. That is because the marginal investor is willing to pay $45 per share. All the other investors are happy to pay $45 as well because their bids were higher. This is different from a traditional IPO where an investment bank sets the price of the shares and then works to sell the shares to institutional investors. There is generally a small spread between the price the bank sells the shares at and the price at which the institutional investors sell the shares on the secondary market. Please see our traditional IPO article for more information.

Allocation of Shares When Bids Are Split

Consider the same Company ABC example, but with the following bids and bid prices instead:

In this scenario, the Company’s underwriter would still create a list, with the highest bids at the top, and work its way down the list of bidders until the total desired number of shares are sold:

Depending on the rules of the Dutch Auction, the company would do one of two things. The first possibility would be pricing at $50 and dividing the remaining 5 million shares between Investors A and D. Each would get 2.5 million shares. This method rewards Investors B, C, and E by giving them all the shares they bid for because they were willing to pay a higher price.

The Company would divide the 25 million shares available by the 50 million shares desired by Investors A, B, C, D, and E (25 million / 50 million = 50%). This would allow each of the investors to receive half of their desired shares at the $50 per share price. The table below illustrates this outcome.

One of the most well-known examples of a Dutch Auction being used to price shares for an IPO occurred in 2004 when Google went public. Google’s use of a Dutch Auction was intended to reduce the underpricing of shares while simultaneously offering retail investors the opportunity to invest. Google’s S-1 states:

“It is important to us to have a fair process for our IPO that is inclusive of both small and large investors. It is also crucial that we achieve a good outcome for Google and its current shareholders. This has led us to pursue an auction-based IPO for our entire offering. Our goal is to have a share price that reflects an efficient market valuation of Google that moves rationally based on changes in our business and the stock market… Many companies going public have suffered from unreasonable speculation, small initial share float, and stock price volatility that hurt them and their investors in the long run. We believe that our auction-based IPO will minimize these problems, though there is no guarantee that it will.”2

The initial target price range per share for Google’s IPO was $108 to $135. However, just days before the bidding started, Google cut the expected price to a range of $85 to $95.3 Google was able to raise more than $1 billion of capital during its IPO. However, there is some debate as to whether Google ultimately used the most efficient pricing mechanism.4

At the time of Google’s IPO, it was the third richest U.S.-based IPO on the NASDAQ in history. On the first day of trading, Google’s market capitalization was approximately $23 billion, making Google one of the most valuable companies listed on a U.S. exchange.5

As one of the most popular search engines at the time of the IPO, Google benefited from certain advantages that improved the results of the Dutch Auction, including a widely known brand name and a broad user base.6 These advantages allowed Google to garner significant publicity and attract a wide variety of prospective investors. Because the IPO is also a way to market the company to potential users, the Dutch Auction process helped find a wider base of investors and customers. Ultimately, Google was able to raise $1.67 billion through the offering and, partially because of the IPO’s performance in spreading awareness about the company, Google earned record revenues of $806 million for the third quarter of 2004 (up 105% from Q3 of the prior year),7 and $1 billion in the fourth quarter (up 101% from Q4 of 2003).8 While democratization of finance has become a global trend (think of the Robinhood app and cryptocurrency). In 2003 the everyday user of Google having the opportunity to participate in the IPO was a marketing event on top of a capital raise.

Google’s IPO was profitable and effective, especially considering it used an unconventional Dutch Auction process for pricing shares. Google’s Dutch Auction set an appropriate price for the offering and satisfied the company’s business goals by raising a considerable amount of capital. The Dutch Auction also satisfied the company’s goal of providing retail investors with an opportunity to participate in the IPO because any investor hoping to buy 100 shares could place a bid over the Internet and compete against mutual funds and other institutional investors.9 There were no restrictions (such as accreditation) on what kind of investors were allowed to participate.

Although Google’s IPO accomplished its financial goals and allowed retail investors to participate in the Dutch Auction process, the IPO also had its share of problems. In the weeks leading up to the IPO, Google faced several well-publicized negative news reports that may have affected the pricing of shares and the overall success of the IPO.

On the same day that Google released an amended S-1 stating the anticipated price of shares would be in the $108-$135 range,10 the Google search engine was exposed to a variant of the MyDoom virus,11 which slowed down service for a few hours for some users.

Around the same time, allegations surfaced that over 23 million shares issued by Google to its employees and consultants before the offering may have violated state and federal securities laws.12 There was also an ill-timed Playboy interview with Google’s co-founders, which was published during the “quiet period” of the offering and was perceived by some as a violation of Section 5 of the Securities Act of 1933.13 The Securities and Exchange Commission (the SEC) describes this “quiet period” as “the period of time surrounding the filing of a registration statement during which an issuer of securities must ensure that its offering-related communications comply with the federal securities laws.”14 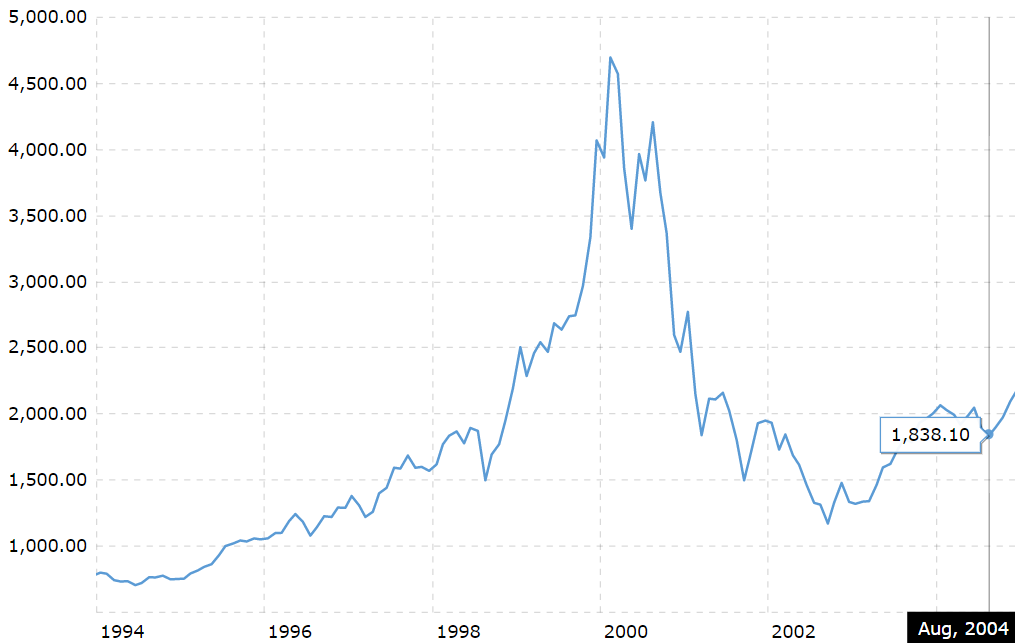 The crash of the dot-com bubble occurred only three years prior, and with the NASDAQ sitting at its lows for the year, several other tech IPOs had already been postponed or canceled.16

Despite all the negative press, a generally weak market, and an unconventional style of pricing shares, Google was still able to raise over $1 billion of capital. The Google IPO demonstrated that Dutch Auctions work on a large scale and are a viable alternative to the traditional IPO process. It may be because of the press generated by the Dutch Auction process that the company was able to have a record quarter in spite of the headwinds created by the general environment around tech companies.

Dutch Auction IPOs provide an economically efficient pricing methodology where share price equals demand. In theory, Dutch Auctions set a fair market price and allow the issuing company to raise more capital. Additionally, Dutch Auctions provide companies with yet another alternative to the traditional IPO route. This process also allows retail investors to be directly involved in the IPO process and purchase shares at prices that are up to their discretion.

M&A: Buy Side vs. Sell Side Before engaging in a merger or acquisition, be sure to learn about the services and incentives of advisors on each…
IPO Underpricing Causes This article explains the reasons and motivations behind IPO underpricing. The understanding of these mechanisms can assist issuing companies in…
Secondary Pre-IPO Markets How can I buy or sell stock in a company before an IPO?

Tyson is from Morgan, Utah and grew up playing in the snow and on the lake. He loves to do anything behind a boat like water skiing, wakeboarding, and tubing. Baseball is his passion, and his dream job is general manager of a professional sports franchise. He enjoys spending time with his wife and travelling to new places with her. Tyson will be joining EY in New York in their Derivatives and Financial Instruments group.